because I have seen Th Pasta Korean Drama . . I'd like to share about pasta and it's history also it's way to eat let's check it out! 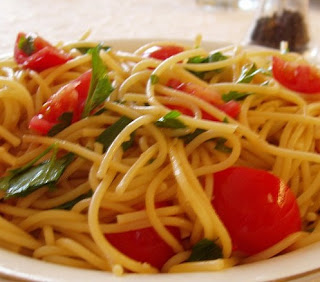 Pasta is a generic term for foods made from an unleavened dough of wheat or buckwheat, flour and water, sometimes with other ingredients such as eggs and vegetable extracts. Pastas include noodles in various lengths, widths and shapes, and varieties that are filled with other ingredients like ravioli and tortellini. The word pasta is also used to refer to dishes in which pasta products are a primary ingredient. It is usually served with sauce.

There are hundreds of different shapes of pasta with at least locally recognized names.Examples include spaghetti (thin rods), macaroni (tubes or cylinders), fusilli (swirls), and lasagne (sheets). Two other noodles, gnocchi and spätzle, are sometimes considered pasta. They are both traditional in parts of Italy.

Pasta is categorized in two basic styles: dried and fresh. Dried pasta made without eggs can be stored for up to two years under ideal conditions, while fresh pasta will keep for a few days in the fridge. Pasta is generally cooked by boiling.

Under Italian law, dry pasta (pasta secca) can only be made from durum sticks wheat flour or durum wheat semolina. Durum flour and durum semolina have a yellow tinge in color. Italian pasta is traditionally cooked al dente (Italian: "firm to the bite", meaning not too soft). Outside Italy, dry pasta is frequently made from other types of flour (such as wheat flour), but this yields a softer product that cannot be cooked al dente the same way. There are many types of wheat flour with varying gluten and protein depending on variety of grain used.

Particular varieties of pasta may also use other grains and milling methods to make the flour, as specified by Italian law. Some pasta varieties, such as pizzoccheri, are made from buckwheat flour. Fresh pasta may include eggs (pasta all'uovo 'egg pasta'). Whole wheat pasta, which generally contains more fiber and more nutrients than refined pasta, has become increasingly popular. Whole wheat pasta designed to appeal to people familiar with refined grain pastas may have a mixture of whole grain and refined grain ingredients.
Accompaniesment

Pasta is generally served with some type of sauce; the sauce and the type of pasta are usually matched based on consistency, ease of eating, etc. Common pasta sauces in Northern Italy include pesto and ragù alla bolognese, which usually adds meat to the sauce. In Central Italy, there are simple sauces such as tomato sauce, amatriciana and carbonara. Southern Italian sauces include spicy tomato, garlic, and olive oil, with the pasta often paired with fresh vegetables or seafood. Varieties include puttanesca, pasta alla norma (tomatoes, eggplant and fresh or baked cheese), pasta con le sarde (fresh sardines, pine nuts, fennel and olive oil), spaghetti aglio, olio e peperoncino (literally with garlic, [olive] oil and hot chili peppers)
Kind of Pasta
Fusilli 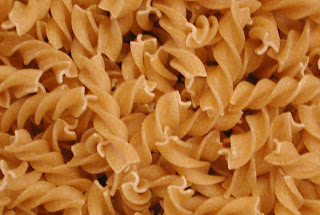 Fusilli is a long, thick, corkscrew shaped pasta. The word fusilli presumably comes from fusile, archaic or dialectal word for "rifle" (fucile in modern Italian), referring to the spiral-grooved barrel of the latter. The word can also mean "little spindles" in standard Italian.

Green and red varieties of fusilli (or any pasta) are created by using spinach or beet juice, respectively, instead of water. There are also whole wheat versions of fusilli available.

Fusilli is not to be confused with the short, flattened, twisted pasta known as rotini.

Penne (pronounced /ˈpɛni/ [UK], or /ˈpɛneɪ/ [US]) is a type of pasta with cylinder-shaped pieces. Penne is the plural form of the Italian penna, deriving from Latin penna (meaning "feather" or "quill"). In Italy, penne are produced in two main variants: "penne lisce" (smooth) and "penne rigate" (furrowed), the latter having ridges on each noodle. There is also pennoni ("big quills"), which is a wider version of penne. The same or similar shape is also called mostaccioli (meaning "little mustache" in Italian, a form of penne lisce that is smooth, not ridged, in texture) and ziti (long hollow rods which are also smooth in texture and have square-cut edges; "cut ziti" are ziti cut into shorter tubes), and can refer to particular dishes made from penne-shaped pasta. Ziti is not commonly available in the western United States. There is also zitoni, which is a wider version of ziti. It can be somewhat difficult to differentiate between subtypes of penne in the USA, since regional differences in product naming can result in both ridged and smooth forms of penne being labelled interchangeably. Penne is traditionally cooked to al dente and served with pasta sauces such as pesto and marinara. Penne is a popular ingredient in pasta salads. Penne makes an excellent and versatile pasta for many applications because of its very practical design. The hollow center allows it to hold sauce, while the angular ends act as scoops. Penne rigate's ridges allow it to hold still more sauce, as well as offering an alternative textural option for certain dishes; penne lisce offers a refined sensation to the palate. 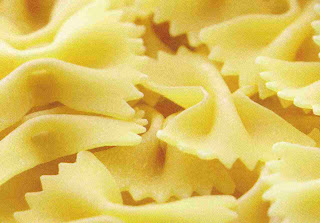 Farfalle are a type of pasta. Commonly known as "bow-tie pasta," the name is derived from the Italian word farfalla (butterfly). The "e" at the end of the word is the Italian feminine plural ending, making the meaning of the word "butterflies."

Farfalle date back to the 1500s. It originated in Lombardia and Emilia-Romagna in Northern Italy.

Linguine (also spelled 'Linguini') is a form of pasta — flat like fettuccine and trenette, but narrow like spaghetti. The name linguine means "little tongues" in Italian, where it is a plural of the feminine linguina. A thinner version of linguine is called linguettine.

Linguine originate from the Campania region of Italy.[1] Linguine alle vongole (with clams) is a popular use of this pasta.

While spaghetti traditionally accompany meat and tomato dishes, linguine are often served with seafood or pesto. Linguine are slightly wider than spaghetti, and there is a companion product called linguine fine which are similar in width to spaghetti.