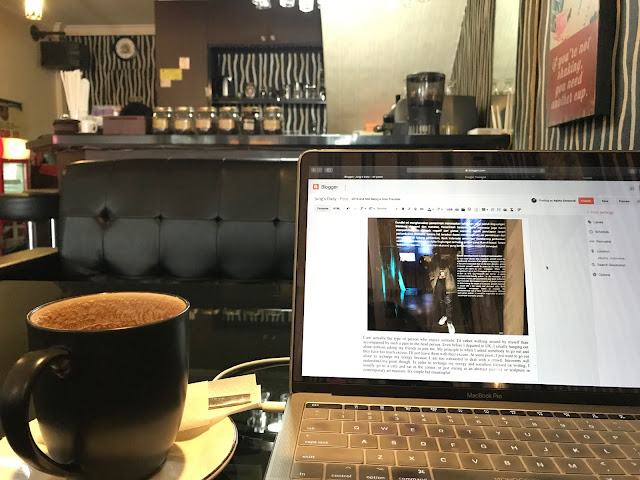 "I thought a person who works in finance or having more knowledge about finance is better in terms of money management."

That was an actual statement came from my friends. Jokingly, I said to him that since I knew how to manage my upcoming income, therefore I decided to spend a lot for today's consumption. On the other hand, I actually had similar question: Will somebody with sufficient financial management knowledge be able to control their own spending and be rational every time? Just like what traditional economic assumed, human are rational.

It's been two months or more, I struggled with financial management. It's not like I don't have any savings or not recording my daily expenditure, but rather to the big-unexpected spending that I usually do. To sum up, I can't say that my current financial condition is in a good shape. For example, I have just received a credit limit in huge amount from the current account I'm holding in. Since the number they offered me is quite big, I keep thinking that I own an emergency fund which I could use anytime. This affect my cognitive ability because I disregard the fact that it wasn't my actual money but a loan.

Well, is it just me or everyone does the same?

An example from 2009 shows that even investors with deep fundamental knowledge could take irrational action to avoid loss which eventually lead them to bigger losses (1). Because of this, Behavioural Finance reborn. There were several paper and publication has been released in the field of Behavioural Finance, the most notable was written by Kahneman and Tversky (1979) and Thaler's Thinking Fast and Slow. In this case, Behavioural Finance could be the tool to train people to think more rationally when it comes to investing or spending their money.

Since I studied Behavioural Finance and giving financial consultation to my friend regarding investment, some of my friends started to recognise me of having well-managed-budgeting. In fact, I am not even close to what they describe. I learnt to record my daily spending from a friend who study  informatics technology, I learnt to start investing from a friend who works as freelancer. On the contrary, I gained more options to invest or distributing my money to worthwhile stuff not because I took accounting or majoring in Behavioural Finance.

Similar to hypothesis that even the expert of Behavioural Finance or the cleverest economist in the world cannot beat the market, somehow a finance graduate could have the difficulty to manage their own spending. Nevertheless, an economist or financial advisor are still trustworthy if they could perform a good analysis and giving suggestion to manage their client's money successfully. Somebody needs to be patient, own high level of integrity, aligned core values, and have a firm financial plan for its client to be a trustworthy financial advisor (2).

Though I am not really qualified to be a financial advisor, some of my friends asked me regarding investment choices and financial products. I will gladly explain which one is the best and most suitable portfolio options for them. Simply, all I did was educate my friends to be financially literate. I could also give them suggestion on how they manage their money, for example: explaining how they should do the 50-20-30 rules or tracking their spending habits since it's actually helpful to alarm over budget expenses (3). Unfortunately, that doesn't really work on myself.

Do I act rational with my regular spending?

I couldn't say so. Sometimes, I am acting irrational and become an impulsive shopper. On the other hand, I realise that I suffered overconfidence bias with my spending because I thought I have planned my future consumption by creating a monthly budget. I also suffered loss aversion which make me feel it's easier to spend more rather than saving less. In addition, I usually neglect the possibility of not getting any income in the future because I believe that I could generate money aside my primary income.

The bottom line, being irrational doesn't necessarily a bad move. However, we need to understand in which part we started acting irrationally. Is it because we have been too greedy to get higher return and ignoring the risk? Or is it because we started to neglect our future consumption for today's expenses? In my case, I just need to reduce the irrationality because of the behavioural biases to keep my financial situation under control. Being irrational is normal, it's just how much irrationality could we keep under control so it won't crash our wealth in the future.